× Bidding has ended on this item.

Buyer and Seller agree to these Terms and Conditions and affirm under penalties of perjury that all information furnished is true and correct.  Buyer and Seller represent and agree that he/she is of legal age and is competent to form a binding contract.

In order to view and bid on lots from Andy Kocher Sport Horse Auctions, one must register at Auction.AndyKocher.com/Account/Register.

Each bidder must create a separate account, which includes registering credit card information. Credit cards will not be charged unless a winning bid is secured (Please see: Payment for more information).

Bidding is conducted completely online during a specified time frame at Auction.AndyKocher.com.

Each lot has a "Make an Offer" feature, in which bidders may submit an offer of their choosing to be reviewed by the Seller. Bidders are encouraged to utilize this feature, which becomes available upon the start of the auction. If an offer is accepted, the lot is immediately marked as "completed" and sold to the Buyer.

Upon securing the winning bid for the horse, the bidder’s will be charged for five percent (5%) of the winning bid via the payment method on file when the buyer registered.

Full payment may be submitted via one of the following methods at the choice of the buyer: cash, credit card, wire/bank transfer, etc. Andy Kocher Sport Horse Auctions will contact the buyer to arrange full payment.

Full payment must be received within seven (7) business days from the close of the auction. The horse must also be picked up within this time frame. Additional terms, if requested, can be negotiated with Andy Kocher.

Within seven (7) business days of receiving full payment, the buyer will receive the horse’s foal papers and/or passport.

By placing a bid in this auction, the buyer agrees: 1) to be responsible for any purchase made or actions taken by an Agent authorized by Buyer to act on Buyer’s behalf; 2) that registration to bid is not assignable without the express written approval of Andy Kocher Sport Horse Auctions; 3) that if the Buyer has the winning, final bid, or the accepted bid in the auction subject to Andy Kocher Sport Horse Auctions’ confirmation, the buyer has entered into a binding contract to purchase the horse.

All horses are sold “as is” with all existing conditions and defects.

Andy Kocher Sport Horse Auctions will not release a horse to a buyer until the buyer has made full payment for the horse and funds have been verified. If a sale is rejected; if full payment is not submitted by specified deadline; or if the horse is not picked up by the specified deadline; the horse remains the property of the seller, the buyer loses the five percent (5%) down payment submitted when receiving the winning bid. Seller would then have the right to re-sell the horse.

The buyer assumes all risk, responsibility and expense for the horse at the end of bidding or, if sold pending confirmation by Andy Kocher Sport Horse Auctions, upon confirmation of selling price by Seller. Seller will provide up to seven (7) business days (or otherwise agreed upon timeline between buyer and Seller) of basic board and care until full payment is received and the horse is picked up.

This is a Reserve Auction.

The right of the Seller to bid on his/her own horse or pony is expressly reserved.

Andy Kocher Sport Horse Auctions reserves the right to reject any bid or refuse to issue a bidding number to anyone for any reason.

$500 Voucher towards shipping expense of you purchase a horse

$500 Voucher if you have Grand Prix level results as a rider.  To prove this, you must submit proof of 1.45 results from your federation.  A copy of results is sufficient. Please submit this data to aksporthorseauctions@gmail.com

$500 Voucher if you are a breeder of show jumpers.  To prove this send a a copy of foal papers with your name listed as breeder to aksporthorseauctions@gmail.com 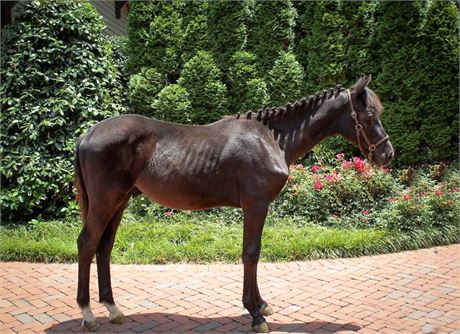 Ice Tea is a 2019 stallion by Igor VD Bisschop out of the Ulano mare Whoopie.

About the Sire Line

Igor VD Bisschop has jumped up to 1.50 with Brooke Cudmore and is by Kashmir Van Schuttershof. Kashmir’s father, NABAB DE REVE, son of the famous Quidam de Revel, was a very successful showjumper with rider Phillippe Lejeune. In his top year 2002 Nabab stood on the 15th place on the FEI World Ranking List. This was due to of the following results: 2nd Grand Prix Dublin, 2nd G.P. Maubeuge, 4th in the Nations Cup series, 2nd in N.C. Donaueschingen and 3rd in N.C. Aachen. Furthermore, he was declared the best horse of CSIO Luzern and Dublin, and he won the bronze medal on the Word Equestrian Games in Jerez.

Some of his offspring performing at GP level are: Kashmir van Schuttershof, Le Rêve de Nabab ( Alvarez Moya ), Nabab’s Son ( Marco Kutcher ), Valentina van ’t Heike ( Jos Lansink ), Vinci van ’t Plutoniahof ( Ludo Phillipaerts )...
His mother, FINES VAN KAMEREN, was immediately used for reproduction and Kashmir was her first foal. Fines is a dauther of Tenor Mançiais (Grand Veneur x Nankin X Ibrahim), who was finalist in the Belgian Championship for Young horses at 4, 5, 6 years old. At the age of 7 he was international successful at Cortina (3th), Deauville (3th); vice-champion of Belgium in 1993; international performer with Phillippe Lejeune at Brussels, Moorsele, Dortmund, 's Hertogenbosch.
His 2th mother, GOTHA, is an Oldenburg premium mare and a product of the famous Böckmann stable (Germany). Ghotha is an offspring of Furioso II X Gotthard, this is an excellent crossing with we also find in the origin of Voltaire and Furioso Z; For Pleasure has Furioso II and two times Gotthard in his pedigree. Gotha is the half-sister of the stallion Corghano (Cordalme) and of the international performing mare Gilane (Lord Liberty), internationally particular successful under the name Lady Liberty. She is also the mother of the stallion Carvazzo (Cordalme) and 2th mother of the stallion Check In (Cordalme).

His 3rd dam, GHANA, also an Oldenburg premium mare, is the full-sister of the international preformer Gotic. She is the mother of five German stallions: Ingold (Inschallah) and four with Furioso II: First Gotthard, Furstengold, Rincon Furiosa and Furstenstolz and she is the 2nd dam of the stallion Rafustinels (Rubinstein) in the Netherlands.